Levar Kemp is the Editor-In-Chief of Snubb3d Magazine. He is…

Netflix and Chill with Anthony: New Hit show & talks of challenges behind the bigscreen

ESSENCE, the number one media, technology and commerce company dedicated to Black women globally, is continuing the year-long celebration of its 50th anniversary with the announcement of GRAMMY-award winning artists Bruno Mars and Janet Jackson as mainstage headliners for the 2020 ESSENCE Festival of Culture™ presented by Coca-Cola. This will be the first-ever ESSENCE Festival appearance and the only 2020 U.S. festival performance for Mars, a celebrated singer, songwriter, producer and musician who has sold over 200 million singles worldwide. Jackson’s performance will mark her third appearance at the Festival, which will take place during her newly-announced Black Diamond World Tour.

“This is a milestone year for ESSENCE and our community as we celebrate 50 years of creating opportunities for our culture to shine and the role of Black women in making it possible for us to do what no other brand has done,” said Michelle Ebanks, CEO of ESSENCE Communications, Inc. “To be able to say that at 50 years, we are Black-owned, diversified across media, technology, commerce and live events, and impacting our culture in new and even deeper ways than ever before is a blessing – and one that comes with a tremendous responsibility to our community to continue to evolve, innovate and transform. That remains our focus and commitment as we work to ensure that we are here serving Black women deeply and advancing Black culture, economic ownership and inclusion globally for the next 50 years.” 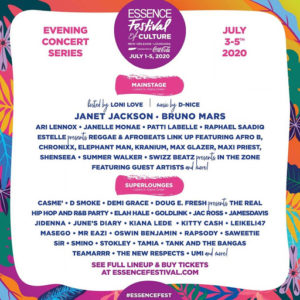 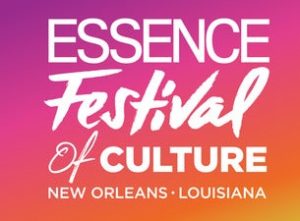 Ebanks continued, “In this celebration year, ESSENCE could not be more excited to welcome Bruno Mars for the first time and to have Janet Jackson return to headline the mainstage during the 2020 ESSENCE Festival of Culture. These two powerhouses, along with our robust slate of programming, performances and tributes, will continue our legacy of cultural excellence and dynamic, only-at-ESSENCE experiences that excite, elevate and inspire. To Bruno, Janet and all our ESSENCE Festival artists we say, ‘Welcome home.’”

As the world’s largest cultural, music, entertainment and empowerment experience and the global epicenter of Black culture, the ESSENCE Festival of Culture has created a home for Black artists and communities around the world for 26 years and routinely attracts more than half a million international attendees over July 4th weekend. In honor of the brand’s 50th anniversary and marking one day for each decade, the Festival will be extended for the first time from three

days to five days and will take place July 1-5 in New Orleans, LA.  This year’s theme, “Own Our Power,” will be at the center of performances, conversations and activations that span arts, entertainment, music, beauty, fashion, technology, film, food, wellness, advocacy, civic engagement, entrepreneurship and economic empowerment.

The Festival’s three-night concert series at the Louisiana Superdome—featuring an eclectic global mix of R&B, Hip-Hop, Reggaeton, Afrobeats and more—includes:

Weekend ticket packages are on sale now with prices starting at $180. For information about ticket sales, accommodations, recently launched exhibitor applications and VIP travel packages,  and the latest news about the ESSENCE Festival of Culture,  visit Essence.com/festival. Join the festival community: Follow us on Twitter @essencefest #EssenceFest and become a fan of Festival on Facebook.

In 2022, how can you keep yourself motivated to lead a healthier lifestyle?

DOCUSERIES “ONE STAGE TO THE NEXT” STARRING GRAMMY-NOMINATED SYLEENA JOHNSON

LYRICA ANDERSON Gives Fans An Intimate Look Into Her World

For those Feeling Down and Frustrated, Self-Help Book ‘Adjust Your Crowns’ Shares Way to Get Back on Track

Quarantine Classes: How to Discipline Yourself Being Fully Online

Lipgloss and Lipsticks! We have some of the hottest New Must Haves.

Levar Kemp is the Editor-In-Chief of Snubb3d Magazine. He is a alum of Howard University in Washington D.C. Mr. Kemp is a producer, director and has a passion for the arts. His diverse background in the industry includes but not limited to: BET, VIACOM, VH1, and other well known publications.